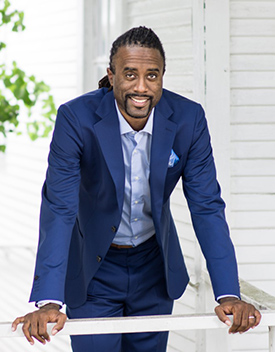 Antoine Bryant, NOMA, Assoc. AIA, APA, is a thought leader and community engagement expert with over 25 years of experience in the planning & design, development, and empowerment of underserved communities across the US.  Working in the public, non-profit, and private arenas, Antoine is well-versed in the demanding language of government regulations and standards, having successfully completed and received funding for HUD 202, 811, and 203K projects, utilized CDBG and HOME funds, as well as Low-Income Housing Tax Credits.  He has leveraged his extensive community development experience to become an advocate for high-potential communities, leading public engagement efforts throughout the country and abroad.

As Executive Director of Row House Community Development Corporation (Row House CDC), he managed and directed the construction of the award-winning Row House Duplexes, the newest quality affordable housing in Houston’s Third Ward in over 15 years.  Antoine led numerous planning and engagement efforts over the years, including serving as a Public Engagement lead with Houston’s METRO, resulting in an 500% increase in critical community engagement activities during his tenure.  Currently, Antoine serves as a Project Manager and Director of Business Development for the Houston office of Moody Nolan, a nationally recognized architecture firm headquartered in Columbus, Ohio.  The nation’s largest design firm under African American leadership, Moody Nolan is excited for its’ innovative designs coming to Houston, with the first two major educational facilities directly within historic African American neighborhoods.  In all of Antoine’s work, intentional efforts are made at empowering indigenous populations who have undergone various levels of disenfranchisement and ensuring that they have a deliberate voice in the improvement and growth of their community.

Nationally, Antoine serves on the Board of Directors for the National Organization of Minority Architects (NOMA) as the Director of Strategic Partnerships, establishing relationships with affiliated organizations and firms that work with architects across the country, who are aligned with NOMA’s vision.  Additionally, he was appointed to the ACE Mentorship National DEI (Diversity, Equity & Inclusion) Committee; and serves as a Health Equity Co-Chair for International WELL Building Institute (IWBI).  Locally, Antoine plays a tremendous role in the growth of the City of Houston, as a member of the City of Houston Planning Commission, and serving as Secretary on the Board of Directors of the OST/Almeda Redevelopment Authority (TIRZ #7).  In the summer of 2016, he was the public engagement lead for APA’s nationally recognized Community Planning Action Team’s (CPAT) first international study, in Belize City, Belize.  Antoine served as the Team Lead for a Master Planning Sustainable Design Assessment Team (SDAT) with the AIA for Central Falls, RI in 2019, as well as the Public Engagement Lead for an SDAT with the AIA in Dubuque, Iowa in 2017.  These are among many other master plans and community engagement initiatives for Columbus, OH; Washington, DC; throughout Houston, TX; and nearly a dozen other cities across the country.  Antoine received his Bachelor of Science in Urban and Regional Studies from Cornell University, and Master of Architecture from the University of Texas, with study abroad experience in Tokyo, Japan.