The first phase of the Detroit waterfront transformation project, three-and-a-half miles of the east riverfront, spans from Joe Louis Arena to Gabriel Richard Park and is more than 80 percent complete.

The completed portions of the east riverfront, along with its sister rails-to-trails greenway, the Dequindre Cut, are populated with approximately three million visitors annually who come to walk, run, bike, spend time with family and friends and take advantage of the quality of life opportunity a revitalized riverfront provides.

Attractions along the east riverfront include parks, plazas, pavilions, pathways and open green space, all connected by the ever popular RiverWalk.

In the summer of 2012, the Conservancy launched the final construction phases to complete the east riverfront project and connect the RiverWalk and its associated green spaces along the waterfront. 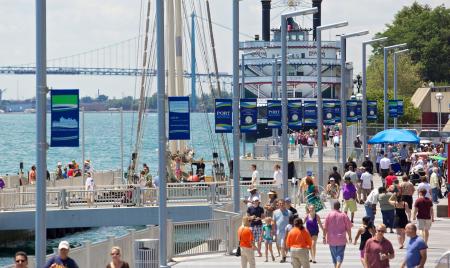 Aretha Franklin Amphitheater is a City of Detroit entertainment venue...

Cullen Plaza is home to many of the east riverfront’s most popular...

The Detroit/Wayne County Port Authority (DWCPA) was created in 1978 as a...

This beloved Detroit park is located just east of the MacArthur Bridge to...

As part of General Motors' renovation of the Renaissance Center for its...

Harbortown is a mixed use neighborhood comprised primarily of townhomes...

For generations, Hart Plaza has been a long-time city riverfront...

The second phase of the Milliken State Park opened on December 1, 2009 and...

Now open to the public, the completely renovated Mt.

The Globe Building, one of the most recognizable structures along the east...

The beautifully landscaped Garden Rooms along the RiverWalk from GM Plaza...

Located in a former Parke Davis laboratory, Roberts RiverWalk Hotel is a...

Poised on the banks of the Detroit River near the heart of downtown...

The UAW-GM Center for Human Resources is the national headquarters for the...

The site of the former Uniroyal factory is located along the east...

The Conservancy’s ultimate vision is to develop five-and-a-half miles of riverfront from the Ambassador Bridge on the west to Gabriel Richard Park, which is just east of the MacArthur (Belle Isle) Bridge.

The first phase of the project, three-and-a-half miles along the east riverfront, is more than 80 percent complete and spans from Joe Louis Arena to Gabriel Richard Park.

Opening up a segment of the west riverfront for long-awaited public access is now a reality with the transformation of a former newspaper printing facility property at 1801 W. Jefferson into a 20-acre green oasis.

The Conservancy purchased the property from the Detroit Free Press in 2007.

Visitors will find three new pathways linking the riverfront to West Jefferson Avenue, benches, trash receptacles and plenty of lush green space for a variety of outdoor activities. The Conservancy has expanded the width of the popular RiverWalk along this parcel to 30 feet to better accommodate adequate space for walking, running, biking and fishing. Safety and security improvements include new railings, lighting, security cameras and call boxes.

The Conservancy continues to work with key stakeholders, including the City of Detroit and private property owners, towards a strategic plan for revitalizing the west riverfront.

Stay tuned for more progress on the west riverfront project in the future. 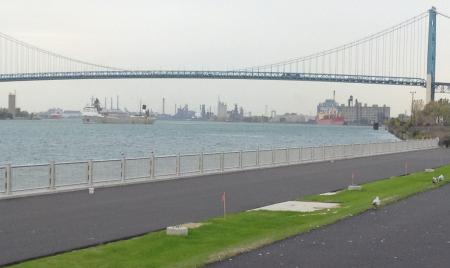 The Conservancy’s ultimate vision is to develop five-and-a-half miles of...

The Dequindre Cut Greenway is an urban recreational path that opened to the public in May of 2009. The two-mile greenway was developed through a public, nonprofit and private partnership—comprising the federal government, City of Detroit, the Community Foundation for Southeast Michigan and the Detroit Economic Growth Corporation—and offers a pedestrian link between the East Riverfront, Eastern Market and several residential neighborhoods in between.

Formerly a Grand Trunk Railroad line, the Dequindre Cut is a predominately below-street level greenway that runs parallel to St. Aubin Street, between Mack Avenue and Atwater Street, just north of the riverfront. Well-known for its examples of urban artwork and graffiti, the greenway features a 20-foot-wide paved pathway, which includes separate lanes for pedestrian and bicycle traffic.

A half-mile extension of the Dequindre Cut officially opened in April 2016.  It runs from Gratiot Avenue to Mack Avenue and takes pedestrians into the heart of Eastern Market.  Buildings on each side of the Cut along this stretch provide users with a glimpse of what the railway looked like when it was a busy hub of activity bringing people and products to Eastern Market and to the Detroit Riverfront.

Also along this stretch, the Wilkins Street Plaza with its soaring canopy, bike racks and a variety of seating options, provides a place for pedestrians to take a break while visiting the Dequindre Cut.

Download a PDF map of the Dequindre Cut Greenway.

Download a PDF of the art on the Dequindre Cut Greenway 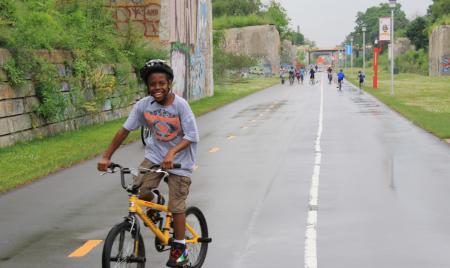 From Friday, September 30 at 6am through Monday, October 3...