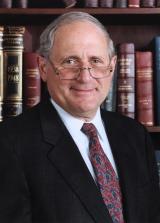 Carl Levin is Michigan's longest-serving U.S. senator (Jan. 3, 1979, to Jan. 3, 2015). He is chair of the Levin Center at Wayne Law and serves as the Law School's distinguished legislator in residence, co-teaching courses on various subjects, including tax law and policy and legislative process and oversight. In addition, he is senior counsel to Honigman Miller Schwartz and Cohn LLP.

In his 36-year Senate career, Levin earned respect from his colleagues on both sides of the political aisle for his integrity, resourcefulness and diligence, and ability to build consensus. He became one of the nation's most respected leaders on national security, a powerful voice for equality and justice, and a fighter for economic fairness.

As chair of the Permanent Subcommittee on Investigations of the Homeland Security and Governmental Affairs Committee, he held public and private institutions to high standards of accountability, rooting out waste, fraud and abuse. He was known for carrying out bipartisan, fact-based and fair inquiries that led to meaningful reforms. His landmark Enron investigation supported passage of the Sarbanes-Oxley Act of 2002, strengthening U.S. financial reporting and accounting rules. The Levin-led subcommittee produced the only bipartisan report on key causes of the 2008 financial crisis, paved the way for credit card reforms that benefited millions of families and held hearings that helped break the filibuster of the Dodd-Frank Act of 2010, eventually leading to the most significant financial market reforms in a generation.

As chair of the Senate Armed Services Committee, Levin focused on taking care of the men and women of the military and their families, supporting pay raises and improvements in treatment and other policies for wounded warriors. He led oversight efforts to improve efficiency and reduce cost overruns in expensive weapons programs. He opposed the resolution giving Congressional authorization to the 2003 invasion of Iraq, offering an alternative resolution that would have given time for U.N. inspectors to complete their search for weapons of mass destruction and require the administration to seek international support before taking military action. He supported military action to eliminate the al-Qaida threat in Afghanistan. He consistently supported policies that would encourage Afghan leaders to take responsibility for their nation's security.

Before being elected to the Senate, he was a member and president of the Detroit City Council. He also served as the first general counsel of Michigan's Civil Rights Commission, after which he was special assistant attorney general for the state of Michigan and chief appellate defender for the Legal Aid and Defenders Association of Detroit. At that time, the association was the largest provider of legal services to low- and moderate-income people in Michigan and one of the largest in the nation.

Levin earned a bachelor's degree in political science from Swarthmore College and a law degree from Harvard Law School. Wayne State University recognized Levin with an honorary degree in 2005. In 1961, he married Barbara Halpern, a 1977 graduate of Wayne Law. They raised three daughters, Kate, Laura and Erica, and seek to spend as much time as they can with their six grandchildren.